In average, one out of five Americans has the risk of developing skin cancer sometime during their life. The statistics are even more worrying if you think that over 65,000 people in the world die from skin cancer every year. The best thing to do is to prevent it and be aware of symptoms of skin cancer. Early detection can save your life. 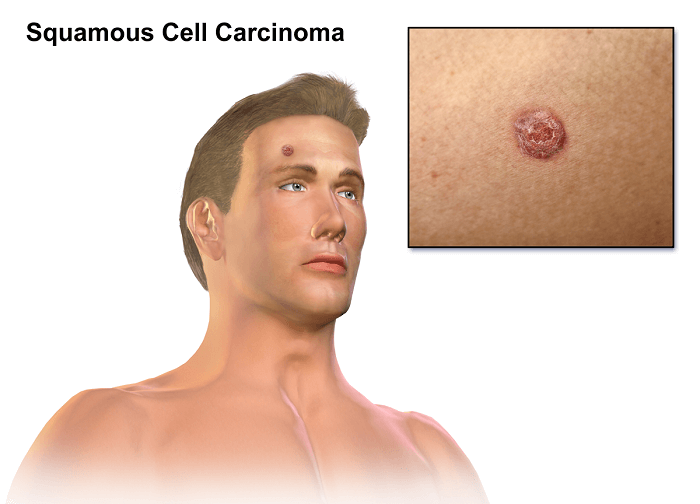 Many people have moles, but most of them are normal ones. They appear during childhood or even in young adulthood. If they are small, flat and evenly colored, you can relax. However, if your moles appeared later on in life and if they seem to modify their texture, color, and size, you should go to the doctor. It can be one of the symptoms of skin cancer.

If you see strange spots on your skin that change their shape, size or color, it may mean there is something wrong with your health. Skin melanoma goes by the name of “ugly duckling sign”. Doctors recommend us to consider the ABCDE rule when we check our bodies for melanomas. ABCDE stands for the following things: asymmetry, irregular borders, uneven color, large diameter, evolving in shape and color. Sometimes, these spots can cause pains and sores.

All Sorts of Weird Bumps

One of the most common symptoms of skin cancer is having a bump. Not just any bump but one that doesn’t stop bleeding. It can even look like a harmless pimple. The only difference is that the cancerous bump will eventually ulcerate. Also, if you have a sore that doesn’t seem to heal, it can be a sign of carcinoma, which is a type of skin cancer.

This can present itself in plenty of forms. For example, it can be a round growth which has a crusty center and raised edges. In other cases, this can look like a shiny raised skin area which can have different colors, from red to brown and even black. Don’t confuse this kind of skin cancer sign with a simple mole. You shouldn’t ignore any of these symptoms of skin cancer. It is better to be cautious than to treat such a horrible disease.

This symptom presents itself as a cell carcinoma which spread throughout your entire body. It happens when your skin develops red patches which are also scaly and crusted. Another secondary symptom can be itchiness. Some people confuse this sign with eczemas, rashes, or fungus. Don’t let this symptom evolve too much. Treating it early can reduce the skin cancer risk.

All of the above are common symptoms of skin cancer. If you have normal moles or simple rashes, you shouldn’t worry too much. However, it is good to seek a doctor’s opinion, to make sure that everything is alright. There are plenty of prevention ways that you should consider, such as avoiding sunburns. You can do this by staying in the shade, wearing protective clothes, and applying a generous quantity of sunscreen.