What Are the Normal Weight Fluctuation Limits? 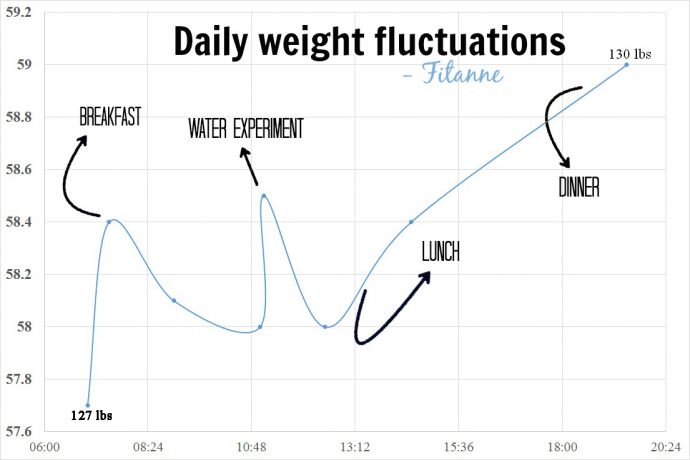 For all those interested in stable weight loss, or bodybuilding, or simply for those with a scientific curiosity, this post is for you. If you’ve been curious about weight fluctuations and why they occur, the mystery is about to be unraveled.

Why Does My Weight Fluctuate So Much?

Any weight loss consultant will advise you not to weigh yourself every day. Do you know why? Precisely because of the normal and totally expectable daily weight fluctuation. If you jump on the scale every day, or even several times a day, the conflicting figures you see there may get you discouraged. To prevent them with messing up your motivation, it’s best to only weigh yourself once a week or so.

How much should my weight fluctuate, you’re probably asking yourself whenever the scale shocks you. The truth is that whenever you see a dramatic change on the scale, from one day to the next, the culprit is water retention.

But what are the expected numbers when it comes to daily changes, you’re probably wondering. Be prepared, the figures may be higher than you expect. Such weight fluctuations due to water can amount to as much as 5 to 10 pounds. Yes, that’s over the course of just one day!

But knowing this fact shouldn’t relax you in a way to make you ignore what the scales show from now on. If the chief risk of over-checking your weight is getting panicked about weight gain unnecessarily, the other risk is getting too relaxed. You shouldn’t dismiss an increased weighing result as fake (caused by temporary water retention) and diminish your efforts. This is precisely why you should just remain strong and don’t check the scale more often than told to.

There are also some expected and normal seasonal weight fluctuations you should know about. It’s been scientifically proven that most people gain a little weight in the cold season regardless of other factors. This isn’t caused by the temporary spike in caloric intake during the holiday peak season, as you might think. It’s just a simple and unavoidable effect, just as losing a bit of weight during the warm season is, as well.

A small percentage of people experience the opposite effect, making it easier for them to get slimmed in winter. Whatever your personal metabolic rhythms, rest assured that weight fluctuations (both seasonal and daily) are perfectly normal. But as you come to accept them, don’t be deterred from your (balanced) diet and exercising goals. And stay off that scale!